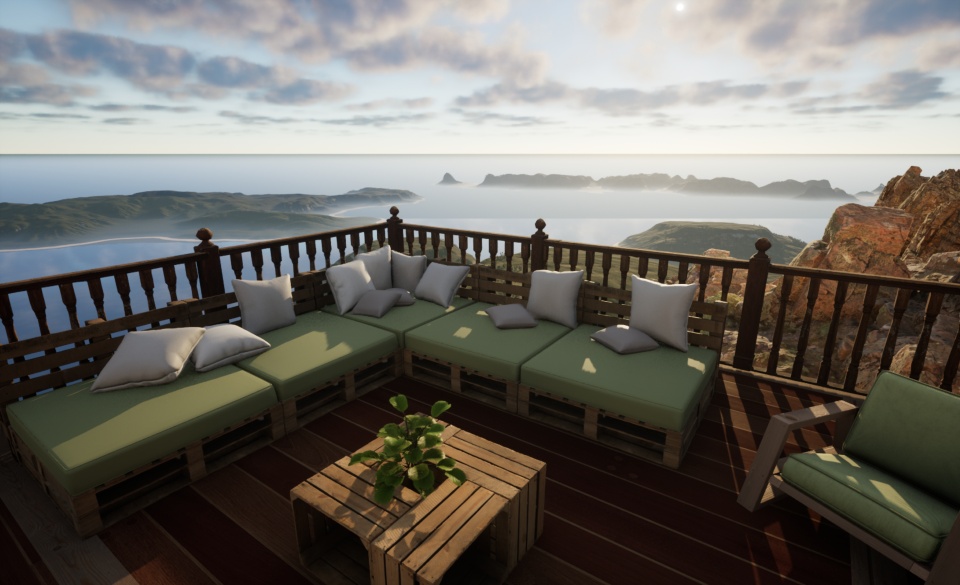 During the NFT boom and crypto winter of 2021 and 2022, several Metaverse projects were launched. During this same time, Facebook changed their name to Meta, betting big on the Metaverse. Parallel to this, nVidia has been releasing astonishing updates to their Omniverse software system, activity echoed by game engine companies Unity and Epic Games. Anticipating this as the next big thing, massive investment has gone into these projects. Although it’s expected to become huge, many people—most notably the end-users—are confused about what and why the Metaverse.

Possibly the next big Internet thing, “Metaverse” is currently a buzzword used to promote a developing convergence of technologies. In this blog post I’m considering reasons for poor metaverse uptake and user retention.

If you can’t explain it to a six year old, you don’t understand it yourself.

Several developers are giving us their interpretation of the Metaverse. When the dust settles, years from now, we’ll get to see what the Metaverse actually turned out to be. Right out of the gate, project names caused confusion.

By one definition, the Metaverse is used primarily to refer to an anticipated future iteration of the internet that’s often hailed as Web 3.0. By another definition, a Metaverse is a virtual-reality space in which users can interact with a computer-generated environment and other users.

Some companies use the word “metaverse” to refer to their virtual world, e.g. Fratiar Metaverse. This may suggest that various companies are competing to build The Metaverse when they may just be a single planet in that potentially vast universe. Some of them mash the metaverse buzzword into their project name, e.g. Frativerse. So, does “metaverse” refer to the universe, the planet, or both?

A standard naming convention should reduce confusion. We have the Web, a Website, and Webpages. This makes sense to most of us. What’s the equivalent for a website in the Metaverse? Metasite. Metaworld. Metarealm. Or is a metaverse the equivalent of a website? If so, what’s the plural . . . metaverses? And then what’s the larger network (the equivalent of the Web) to be called? Perhaps Omniverse? O, wait, that’s already taken.

This brings us to the missing link. Most current metaverse projects are being developed using game engines, with no links between different projects. The only way to go from one world to another is to run a different game app on your device. It’s like a gamer playing Anno 2070, quitting the game, and then launching Fortnite.

When we compare the Metaverse to the World Wide Web we see the latter is interconnected through hyperlinks. Even though websites have different domains, run on different servers, and are created by different people, one webpage can easily connect to another, even without permission. It’s an information network woven from the same fabric.

For now the Metaverse lacks this common interconnected fabric, leaving each ‘metaverse’ to exist in isolation . . . just like video games . . . adding to the confusion. We’re trying to understand the future based on the past and present.

Is this a metaverse made with a game engine? If so, isn’t it really just a game called a metaverse? Is there anything which differentiates it from a video game? Why not just call it a game?

If they’re so similar, and video games have been adopted by millions and billions of players worldwide, why isn’t the Metaverse working? Crucially, the term ‘works’ is not just technical, but rather how it’s received and perceived through user experience (UX). There’s nothing preventing a metaverse from being coded and deployed (the technology already exists) but is the UX wonderful, inviting, fun, functional, productive, entertaining, engaging, focused, sensible, etc.?

So, it’s got awesome graphics, but how’s the gameplay?

Even though the Metaverse and modern 3D games employ similar technology, gamers have no confusion about gaming. Doing predetermined cool stuff in virtual space is called playing, and it’s fun!

In my opinion, the Metaverse is failing because it’s essentially got poor gameplay, because it doesn’t quite know what it is. This phenomenon is not just limited to the Metaverse or video games. We also see it on websites, mobile apps, and in movies.

Awesome visual effects, just a pity the story sucked with so many plot holes. Do these filmmakers think we’re idiots?

A $350M budget blockbuster movie with amazing VFX and a bunch of big name actors scores a paltry 5.7/10 with mixed reviews, while a $6.5M live action drama scores an enviable 8.2/10 with heaps of positive buzz. Clearly both movie producers and their teams were technically able to make a movie. In both cases the moviegoer watches a movie. How it was produced is irrelevant. Obviously, it’s not just about the budget, and not just about the tech. It’s also about structure, story, purpose, deeper meaning, and more . . . some intangible ‘magic’ not easily obtained by throwing heaps of money at it. This also applies to the Metaverse.

If the Metaverse is not a game, why should it have good gameplay? OK, I’ll play along. Let’s say it’s not a game. It should still be something, and what you do with it should be specifically defined, very well implemented, and focused. “Hang out with friends” is not specific enough, in my opinion.

Fortnite is a MMO game where we can also “hang out with friends.” So why do people flock to Fortnite while leaving the Metaverse mostly vacant? In Fortnite we don’t just hang out with friends, we do something thrilling together. We play together, fight and defend together, strategize to reach a goal, run, jump, teleport, zip-line, swim, ride, hack, shoot, switch weapons, collect ammo, gather wood, rock and steel to build stuff, run from the closing storm, scream over our comms about bad network ping, express agony, despair, heal a fallen comrade, shriek in excitement, grit our teeth, bang on the desk, laugh, and then reminisce about our shared experiences of near-victory.

Inviting me to go hang out in nondescript virtual space may be like when my wife asks me to tag along to the mall. I follow her around from shop to shop like a melancholy puppy dog. From the very start it’s mind numbing, followed by feet hurting, eventually back ache, then acute upper arm pain from limbs dangling uselessly for too long. I perk up when we sit down for Wild Berry milkshakes. How can she outlast me when I’m the athletic one?! The point is that it’s painful for humans to hang around and . . . just . . . do . . . nothing. We can’t even do nothing while we sleep, or we get aches and bedsores. People thrive when there’s purpose and meaning, with something to do, places to go, people to meet, when we’re mentally engaged. How does my wife cope with shopping while I can’t? Because she’s the one shopping and doing something exciting. When I shop, miraculously, I suffer none of the above symptoms. I’m mentally engaged, busy exploring and touching products, comparing them, making choices, considering my budget, spending, carrying my goods with a spring in my step and a grin on my face—the retail therapy working wonders for my frazzled being.

Although most metaverse worlds can’t exactly be described as ‘doing nothing,’ I would argue they lack a certain draw, levels of personal engagement, purpose, and a few other things, which I call gameplay. Walking around in a mall is also not doing nothing. A mall is a super expensive facility, with fantastic shop-fitting and alluring window dressing to excite the senses. Even so, there’s nothing for me in that moment, so I’m doing nothing, feeling disengaged, and enduring the pain . . . because I love my wife.

Websites are very much defined in what they are, and what you do with them. That definition is expressed through structure. Structure implies limits. A webpage is a scrollable rectangle displaying text, images, and links. Clicking a link opens another webpage, and so on. You’re finding information, viewing images, playing videos and sounds, learning about something, interacting via text chat, being entertained, and more.

Evolving technology has certainly allowed us to do more on the Web than ever before. Even so, individual websites have specific focus: Travel blog. Discussion forum. CAD model library. Food recipes. Streaming video. Company information. Search engine.

Websites generally don’t deliver content under multiple themes or descriptions. People get confused when they do. YouTubers understand this truth, posting videos which adhere to their single theme, tagline, or description. People want to know what they’re getting, and they want the supplier to deliver on that promise.

Metaverses may still be too blurry . . . losing focus while trying to be everything to everyone. What’s that proverb?

If you try to please everyone, you will please no one.

When you achieve sharp focus through a lens, there’s rich detail in the picture you see. Detail and complexity can co-exist with simplicity. Depth of field and bokeh helps guide the eye toward that detail. As does composition, color, lighting, etc. Getting it all into ideal balance is part of the ‘magic’ we pursue. They also call this art, which is why artists are employed by game companies.

God is in the details.

What is this ‘magic’ in reference to metaverses? We believe these worlds should become more structured, and focused in purpose and function. And beautiful, even if it’s the beauty of a grimy back alley, or glaring neon signs beneath a mess of suspended wires running comms between dilapidated apartment buildings. They should entice the player before catering to the crowds. Many involved individuals may form a crowd, but a crowd doesn’t necessarily draw the individual to be involved.

Solution Without A Problem

If the Metaverse is perceived as a solution without a problem, the masses may not readily embrace it early on. Uptake will probably only increase as people see the early adopters benefit from the 2nd and 3rd generation metaverse, when problems are visibly being solved.

Games also offer a solution where there’s no problem . . . don’t they? Despite this, video game uptake is booming. Although games solve no business problems for end-users, they do offer entertainment and escape for people who have that need. Judging by the numbers—3.24 billion gamers in 2022—nearly half the planet needs escape. So then games do solve a problem.

If the Metaverse is supposed to solve online connection between people, it’s one crazy, elaborate and expensive solution. In that space it competes with hordes of other connectivity options, even texting. So far the Metaverse just doesn’t present itself as much of a solution to any practical problem, nor as decent entertainment for people needing escape.

These are my questions and comments regarding the current state of metaverse affairs. What will work is specific to each metaverse. That’s for business people, media developers, and game designers to figure out. Giving users the tools to build their own metaverse can work, but you’ll probably get the equivalent of a shaky home video. In the end, some metaverses will be entertainment focused, while other aspects will solve practical problems. A few metaverses should even manage to successfully deliver both.

Building a metaverse is an exciting road to walk. We’re pressing past the confusion to play our role in defining the VR-enabled Internet.